Ionizer vs Medklinn – What’s the difference?

Negative ion generating ionizers have become quite prevalent in the marketplace as a household appliance designed to clean and refresh the air in our living spaces. However, if you are interested in investing in a tool that can actually sterilize not only the air you breathe but the surfaces you touch in your indoor living space, then the reality is that an ionizer is not going to cut it for you. If you want to create a truly healthy living environment, you need to use Active Oxygen.

A negative ion is an oxygen atom that is charged with an extra electron (0-). Negative ion producing ionizers can help clear your indoor air of a spectrum of larger airborne pollutants such as dust, moulds, some bacteria and larger forms of smoke particles. They do this by attaching themselves to the pollutants in large numbers and hence dragging them down out of the air on to surfaces, helping to clear air of some contaminants. Active Oxygen is a combination of negative ions 0- as well as 03, which is a molecule made of three oxygen atoms. 0- and 03 combined together is what Active Oxygen is, and it is in fact nature’s most powerful sterilizing force currently known to mankind.

Both 0- and 03 are completely chemical-free and natural elements that are created through stimuli that occurs in nature such as natural sunlight and radiation in the earth’s atmosphere, running or moving water such as waves and waterfalls, plant photosynthesis and thunderstorms. That is why the air smells so clean and fresh in the forest, by waterfalls, by the ocean or after a storm. While 0- attaches to larger pollutants in the air and drags them out of the air we breathe, 03 attaches itself to harmful pollutants and actually eradicates them at a molecular level by destroying their cell walls and DNA, rendering them completely harmless. Unlike 0-, 03 can eradicate a full spectrum of contaminants including 99.99% of viruses, bacteria, moulds, spores, allergens, gasses, toxic fumes, Volatile Organic Compounds, smog, and bad smells.

So, while 0- definitely has its positive benefits to our lives, 0- generated on its own in an ionizer has its limitations. Firstly, in order for negative ions to make any impact on our living spaces, they need to be generated in very high concentrations, and the reality often is that ionizers do not generate nearly enough negative ions to make any real impact in our lives. The basic technology to create negative ions also relies on generating a current through a kind of needle-like pin, and these pins are subject to rust and fast wear out, usually only lasting around 3 months before replacement is required. These ionizing pins also create “soot”, a kind of black dust that can stick to and damage walls and surrounding furnishing. These pins also can only emit negative ions in one direction out of an ionizer, so the actual coverage of a space is limited as well.

And of course, ionizers do nothing in terms of actually sterilizing either the air we breathe or the surfaces we live with. So, for example, if you are using an ionizer to help relieve your allergies, the reality is that allergens in your living space have not been destroyed, and most of them are still lingering on your living surfaces, especially your bedding. 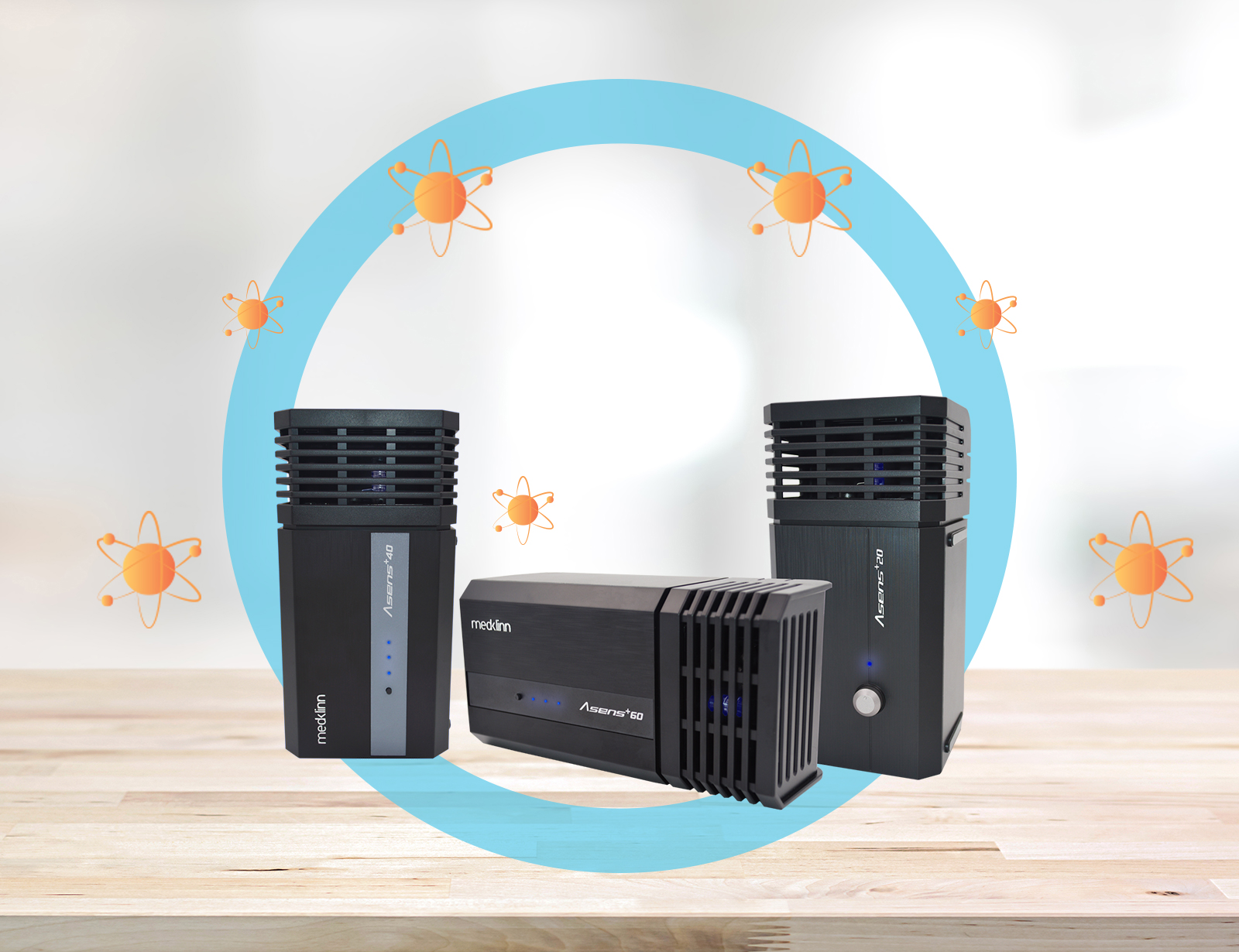 This is where Medklinn Air+Surface Sterilizers really make the difference.
Medklinn’s entirely unique and patented Cerafusion Technology works by generating and emitting Active Oxygen into your indoor environment continuously 24/7, effectively destroying all forms of pollutants – large and microscopic – including gasses, Volatile organic compounds, viruses, bacteria, moulds, spores, allergens, as well as bad smells. And not only in the air but on all of our living surfaces as well. Unlike an ionizer, Medklinn is an Air and Surface Sterilizer because it is capable of truly cleaning the air we breathe as well as the surfaces we touch by rendering any sort of natural or manmade contaminant harmless at a molecular level.

This unique Active Oxygen generating Cerafusion Technology is made possible through a coil style cartridge which only needs to be replaced about once a year. Medklinn devices do not generate any soot, and the technology makes it possible for Active Oxygen to be emitted in effective amounts in multi directions so that your living spaces are covered properly. So if you want to stop compromising and start sterilizing, then Medklinn Air+Surface Sterilizers are what will truly make a difference in your life.